It is with deep sympathy and sorrow that I report that Warren Rodney Morrison (Tank) 981st 67-68 has died today.  Please keep his family and friends in your prayers and thoughts. 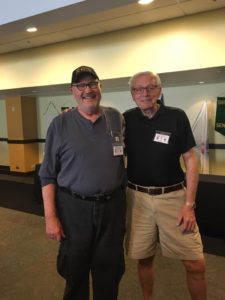 Obituary Funeral services for Rodney “Rollo” “Tank” Morrison, age 71, of Lineville will be held on Tuesday, April 4, 2017, at 3:00 PM from Union Baptist Church with Rev. Ed Halsey and Dr. Steve Dempsey officiating. Burial will follow in the adjoining cemetery with Benefield Funeral Home in charge of arrangements. The family will receive friends at the funeral home from 12:00-2:30 PM on Tuesday, April 4, 2017. Mr. Morrison passed away suddenly from a short illness in the early hours of Saturday, April 1, 2017, at Kennestone Hospital in Marietta, Georgia. Survivors include his wife of 45 years, Cecilia Ruth McClendon Morrison of Marietta; one sister, Judy Morrison Heard (husband, John) of Morrison Crossroads; two brothers-in-law, Frankie McClendon (wife, Diane) of Boaz and Randy McClendon (wife, Geneva) of Boaz; two nieces and four nephews; and his business partner and close family friend, Dianne Farrior of Marietta, GA. Pallbearers will be Stanley Sheppard, Tommy Camp, Jimmy McCain, Vernon Lipham, Harold Harmon, Gary Price. Honorary pallbearers will be Randy McClendon, David Williamson, and Blake Wilson. A Wedowee native, Mr. Morrison was born on March 24, 1946, the son of Warren Rudolph and Daphie Mae Shiflett Morrison. He was a member of Union Baptist Church. He was a 1964 graduate of Randolph County High School and a 1973 graduate of Jacksonville State University. Mr. Morrison was a United States Army veteran of the Vietnam War where he served with the Military Police and Dog Handler unit. Once returning from his military service, he was employed by the Federal Bureau of Labor and Statistics for 23 years. He also ran a successful Christmas tree farm for many years located in the center of Morrison Crossroads. Mr. Morrison retired from BLS in 1996 and he and his business partner ran their own income tax and financial advisory business in Smyrna, Georgia, for many years. They sold their business in 2012 and he enjoyed his retirement on Lake Wedowee, traveling with his wife. He loved his pets that brought great joy to him and his wife. Mr. Morrison was preceded in death by his parents. Memorials may be floral or donations may be made to the Randolph County Animal Shelter in his memory