Remembering Warren Bradley Dodge
October 12, 1949 – September 26, 2018
As I write this on October 12th, which would have been my friend Warren Dodge’s 69th birthday,
I am aware of a cruel blunt simple fact: Warren died from complications of exposure to the military herbicide Agent Orange. About twelve years ago, all of a sudden, he developed symptoms of Agent Orange lung disease. Late last year a tube was placed in his throat to his lungs so as to make it easier for him to breathe and move and reduce stress on his heart and lungs. The doctor said without this he “wouldn’t see 70.” I had no idea that this herbicide was used in Phan Rang but Warren explained that it was used to kill very invasive brush that covered a strategic gasoline pipe that led to their airport. The brush hid young Vietnamese children adept at siphoning off gas in large multi-gallon bottles that would then be used by them as currency in the village.
The herbicide got rid of the brush — dioxin being the highly toxic chemical contaminant that was responsible for most of the devastation — so the kids could not hide any more, and it solved the military problem so to speak. But the human toll on exposed soldiers and their offspring was a different story: prostate and respiratory cancers, multiple myeloma, Hodgkin’s disease, Non-Hodgkins lymphoma, leukemia, Type II diabetes, spina bifida, and other disorders. Warren was not part of a class action or other legal suit. Instead of formal legal redress he went through the VA, which put through a generous financial settlement for him. In the event, he did not see 70 but died at 68, a couple of weeks before his 69th birthday.
On a happier note, Warren enjoyed his extended family and pets, his motorcycles, and taking care of his extensive property in Vermont. The first time I spoke with him over the phone his grandson answered and told me his grandfather was “working” — I envisioned a store, an office, a vehicle. Turns out he was in the backyard supervising the uprooting and removal of a large tree. He once told me recently that he was planning to motorcycle down to Alabama to visit his loving daughter Emily and her family. “Planning” was the operative word here since it was only a fantasy recalling happier times when he could experience the exhilaration of motorcycling directly and not merely as an armchair pastime.
One of his happiest recent discoveries was his bonding with young Hunter McAllister, described by Emily as her father’s “best friend.” More formally Hunter was I believe the grandson of Warren’s second wife, from a previous marriage. Hunter was of middle school age and struggling in school from a possible learning disability, when Warren took over. It didn’t take long and bond they did, especially when Warren found out that Hunter wanted to cook for a living. Warren questioned him further and quickly set up an informal training course in the kitchen. They carefully went over dry and wet measurements and equivalents thereof, talked about cooking in small batches versus cooking the same dishes in volume for restaurants and catering situations, and eventually took over the kitchen for some culinary action. They discussed boiled versus grilled franks, cheeseburgers with sliced cheese on top of the meat versus cheese melted within the burger itself, and which ingredients and variations to use in mac and cheese recipes. Fried and scrambled eggs were tried, as were pancakes (with you guessed it, reader, real Vermont maple syrup), and desserts were not ignored. And in that regard Warren imparted one of the most basic and important rules in dessert preparation: in making sweets make sure you reach for the sugar and not the salt. Words to live by in the kitchen for sure. In my mind’s eye I can see the two of them wearing long barbecue aprons and covered in blotches of wet flour enjoying their time with each other in the kitchen. I hope Hunter continues with his interest in cooking and the lessons he learned from Warren.
As our mutual friend Ken Claflin has said with absolute truth: “Never a dull moment when Warren was around.” Additionally Warren was intelligent, shrewd, patriotic, and had a wonderful memory. He was also a very funny raconteur.
In recent months Warren was in and out of the hospital as the result of breathing problems associated with the tube inserted in his throat. He had to be attached to oxygen canisters 24/7, which meant he could only sleep three hours a time at night before changing his canisters. But he never complained about what he was going through and only had praise for his doctors and the VA.
I know he has found peace now in a better place but I do miss him terribly.
NOTE: I’ve written about Warren before on the News pages of the Alumni website. To access some of these writings open the Comments section of the following documents: Remembering Ronny Bair, for Warren’s motorcycling honeymoon and what happened when he and his new wife got home; Remembering Ralph Hamblin, for Warren in full charge of bartering and scavenging strategies; The Dogs We Loved: Babe, for Warren’s experience in handling sentry dogs; and The Dogs We Loved: Foxy, for Warren in full bromantic comedy mode. The Comments section in each document is at the top under the document’s title, to the right of the date.
Submitted by Steve Dragovich, Company Clerk, 981st, 70/71
Picture 1.Warren Bradley Bill Dodge
Picture 2 Two Kens and a Dodge: Warren in driver’s seat, with non-alcoholic beverage; Ken Hulbert riding shotgun; Ken Claflin with rear end on rear fender. Vietnam 1970.
Picture 3 Warren and Hunter McAllister in a quiet celebratory moment.
Picture 4 Hunter McAllister demonstrating patriotism and facial fuzz. 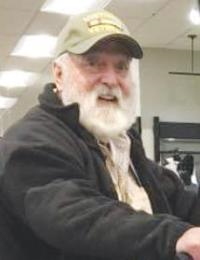 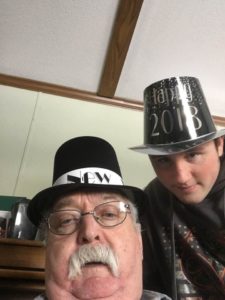 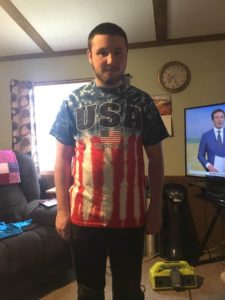