My name is Terry Gawel. After completing Dog Handler School at Lackland A.F.B. with my sentry dog Sherlock (X984) my class flew to Vietnam in an Air Force C-141 cargo jet. We arrived at the 981st in Cam Ranh Bay on March 10, 1970.

After I arrived, the 981st C.O. CPT Billy Held offered me the opportunity to train as a vet tech. After several weeks of O.J.T. at the Cam Ranh kennel, I was assigned to Team D, An Khe in the Central Highlands. It was there I met Joseph Geueke, from Scranton PA. Joe was quite a character, always upbeat and always laughing or smiling. I do not remember anyone who did not like or could not get along with Joe. I still remember and tell stories about Joe that make me laugh.

In December of 1970, I was reassigned to Tuy Hoa where I spent the final few months of my tour. I returned home in February 1971.

It was after being assigned to Tuy Hoa that I lost track of Joe. I have often wondered what became of him over the decades and was saddened to read of his death in the March/April 2017 Sentry Dog Newsletter. In 1970 it seemed like we were young, strong and would live forever.

Joe’s dog was named Rex, and I believe Rex was the dog asked about in the Newsletter. Rex was possibly the meanest dog in An Khe but Joe thought of him as an overgrown puppy. Joe and Rex: Laidback and Vicious. It was an interesting if not amusing pairing. If they did not instill fear in you, they certainly commanded respect and a wide berth!

As I transported Joe and Rex to and from their post in the quarter ton Jeep, Rex would try to pull his muzzle off with both front paws in order to chew my right arm off. I can still hear Joe proclaim with all sincerity: “Doc, I think Rex likes you!”

Thank you for putting me on the Newsletter mailing list. Until being contacted by the 981st company clerk Steve Dragovich in July 2016, I had lost contact with most everyone from that period of my life. It has been interesting, and in some cases sad, to learn the fate of the “men of the 981st.” 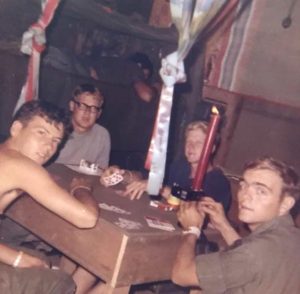 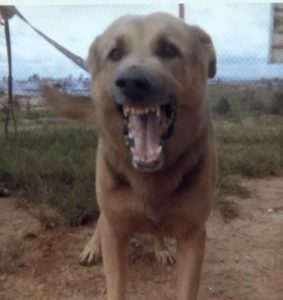